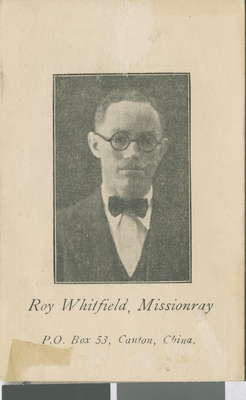 "Roy Whitfield, Missionary. P. O. Box 53, Canton, China. Brother Whitfield graduated form Harding College in the Spring of 1932. In December of that year he sailed for Canton, China, where he is now laboring in cooperation with Brother and Sister Benson, Brother and Sister Oldham, and Brother Davis. He is sponsored by the West Side Central Church, Detroit, Mich. Brother Whitfield is an all-around man, assisting in the daily Bible School work. The Christian publication work, and the evangelistic work. His personal support is still only partially arranged for, and contributions are needed for the extension [sic] of the work on the field. Offerings may be sent in the form of paper currency, personal check, post office money order, or New York draft. Money may be safely sent directly to Brother Whitfield, or to Claud F. Witty, Box 44, Grand River Station, Detroit Michigan. Brother Whitfield should be addressed at P. O. Box 53, Canton, China." A portrait of Roy Whitfield, American missionary from Churches of Christ to Guangzhou (formerly Canton), China. Roy Whitfield, along with his wife Ruth, came to China in 1932 after being encouraged by George Benson, the first American missionary from Churches of Christ to China, to join him there. The Whitfields evacuated Guangzhou in 1939 after the city was overrun by the Imperial Japanese Army. By the end of 1941, after the United States entered World War II and declared war on Japan, most of the American missionaries from Churches of Christ had evacuated Hong Kong, including the Whitfields.