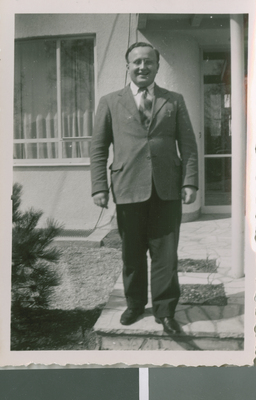 "Bible Student" This is a photograph of Edgar Knoebl. Knoebl served in the German Army in World War II and was a prisoner of war from 1945-1946. After his release, he enrolled in a Bible and training school established by missionaries from Churches of Christ in Frankfurt, Germany in response to an advertisement he saw in a German newspaper. After he completed his work in Frankfurt, he moved to the United States of America and attended Harding College where he received a B. A. and M. A. degree. After he completed his degrees, he returned to Germany and worked with the Church of Christ in Heppenheim. He eventually received a doctoral degree from the University of Frankfurt and returned to America in 1959.