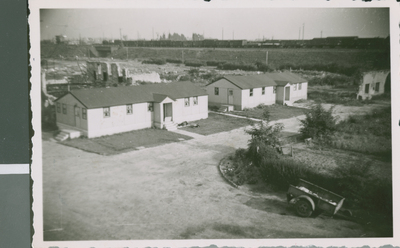 Two of the original barracks that made up the boys' home in Frankfurt, Germany. Missionaries from Churches of Christ, Otis Gatewood and Roy V. Palmer, began this home for war orphans after discovering a large number of homeless and malnourished boys on the streets of Frankfurt, Germany upon their arrival at the city. Partnering with the United States Military, they were originally given the bombed out ruins of the Rebstock Airport. The winter months of 1947-48, however, proved very difficult for the boys and the families caring for them, so since the airport was under United States Army requisition, they appealed to the army from help. General Duff, a high ranking officer stationed in the region, gave them ten prefabricated barracks provided that the missionaries would bear the cost of erection. Two of the barracks are pictured in the photograph with the ruins of the airport behind them.