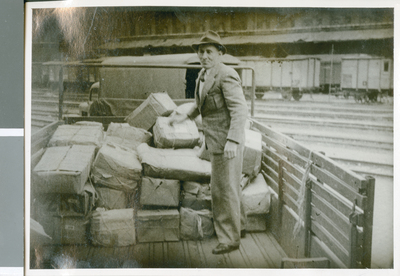 "U. S. loading the truck with relief packages" A photograph of Ulrich Steiniger loading a truck with relief packages from Churches of Christ in America for Germans recovering from World War II. Ulrich Steiniger, was interned in Africa by the British during World War II and while there worked as an engineer at the Nhowe Mission in Zimbabwe with missionaries from Churches of Christ. When Steineger returned to Hamburg, Germany in 1947, he joined missionaries in Frankfurt to aid them in their relief work until his return to the Nhowe Mission five years later in 1952. This photograph comes from a photo album put together by Katherine Patton, a missionary from a cappella Churches of Christ, during her work in Germany from 1948-1958.