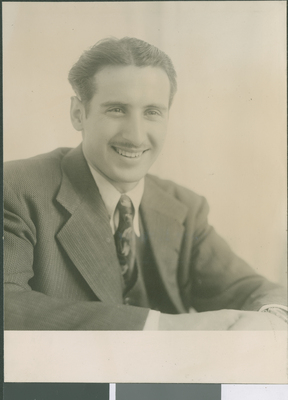 "Japan-born American, Dean Logan J. Fox" Logan J. Fox, the son of H. R. Fox missionary to Japan, was born in Japan and grew up in Tanakura and Ota. During World War II, he returned to the United States where he studied at Chicago University and Pepperdine College in California. There, he studied under Carl Rogers, a Christian counseling expert, who influenced Logan in many policies and motivated him to being a counseling research center on campus. Logan served as dean of the school from 1948-1952 and president from 1952-1961. This photo is part of a photo album given as a gift to E. W. McMillan upon his departure as president from Ibaraki Christian College.