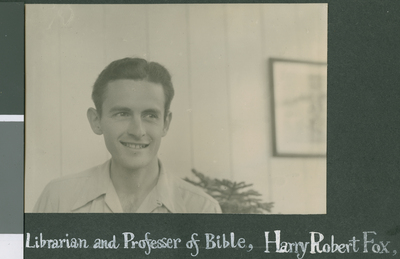 "Librarian and Professer [sic] of Bible, Harry Robert Fox," Harry R. Fox, Jr. was born in Japan in 1921 to missionary parents where he lived until he was 14. Fox returned to Japan in 1947 as a result of General McArthur's call to send missionaries from the United States in order to work in Japan after World War II. Fox, along with his brother Logan, helped establish Ibaraki Christian Schools. This photo is part of a photo album given as a gift to E. W. McMillan upon his departure as president from Ibaraki Christian College.