In 1914 Austin McGary (1846-1928) entered his fourth decade of journalistic work among Churches of Christ when he launched The Open Arena.  From 1884-1902 he edited Firm Foundation; from 1903-1905 he published The Gospel Outlook; and in 1913 he served as Co-Editor of The Faithful Witness. All three were based in Texas. Subscriptions to The Open Arena, which consisted of eight pages, cost 25 cents for six months or 50 cents for a full year.  A. J. McCarty (of Killeen, Texas), C. H. Kennedy (of McKinney, Texas) and Joe McPherson (of Nashville, Tennessee) joined McGary as Associate Editors beginning in January 1915. Later that spring W. L. Stafford (of Altus, Oklahoma) joined became an Associate Editor and served through January 1916.  The bound volume we have in our collection lacks volume 1 numbers 9 and 10.  Further, readers will notice the numbering sequence advances into volume 2 (going through number 5 in July 1915) before reverting to volume 1 number 18 in August 1915.  The paper continued this sequence to the last issue, volume 1 number 28, in June 1916.  Indications suggest McGary could not secure enough subscribers to continue the paper past the summer of 1916.

Devoted to "the good fight of faith" the paper was characteristic of his journalistic stye: forthright and plain-spoken.  McGary is perhaps best known for leveraging his periodicals as a tool for advocating his views on a range of issues, from baptism to socialism, and from the nature of the church to the work of the Holy Spirit.  In the first issue McGary presents three reasons for starting a new paper even as he acknowledges the journalistic field among Churches of Christ has "too many papers:"

...although we already have too many papers, too many of these many we have are dodging certain points of "the faith once delivered unto the Saints" and flying the gospel track--the "narrow way" ordained of God.... I start this paper because there are parts of the field, upon which "plants" that were not "planted of the Heavenly Father," are growing rankly and overshadowing truth, that none of our papers giving attention to, in a "rooting-up" way, that this paper will give some "digging" attention to... ...When the Faithful Witness was discontinued...brethren and friends from many sections of Texas and Oklahoma...supplied me with the funds to introduce the paper and defray the expense of its upkeep for one year...*

Readers of The Open Arena will find much in its pages on these, and many other, topics.  Also of great value are the many items of news and notes about happenings among Churches of Christ.  Congregational and regional historians, students of intellectual and social history, and anyone interested in the history of Churches of Christ and Christian Churches will find the volumes of The Open Arena a welcome addition to their palette of source material. 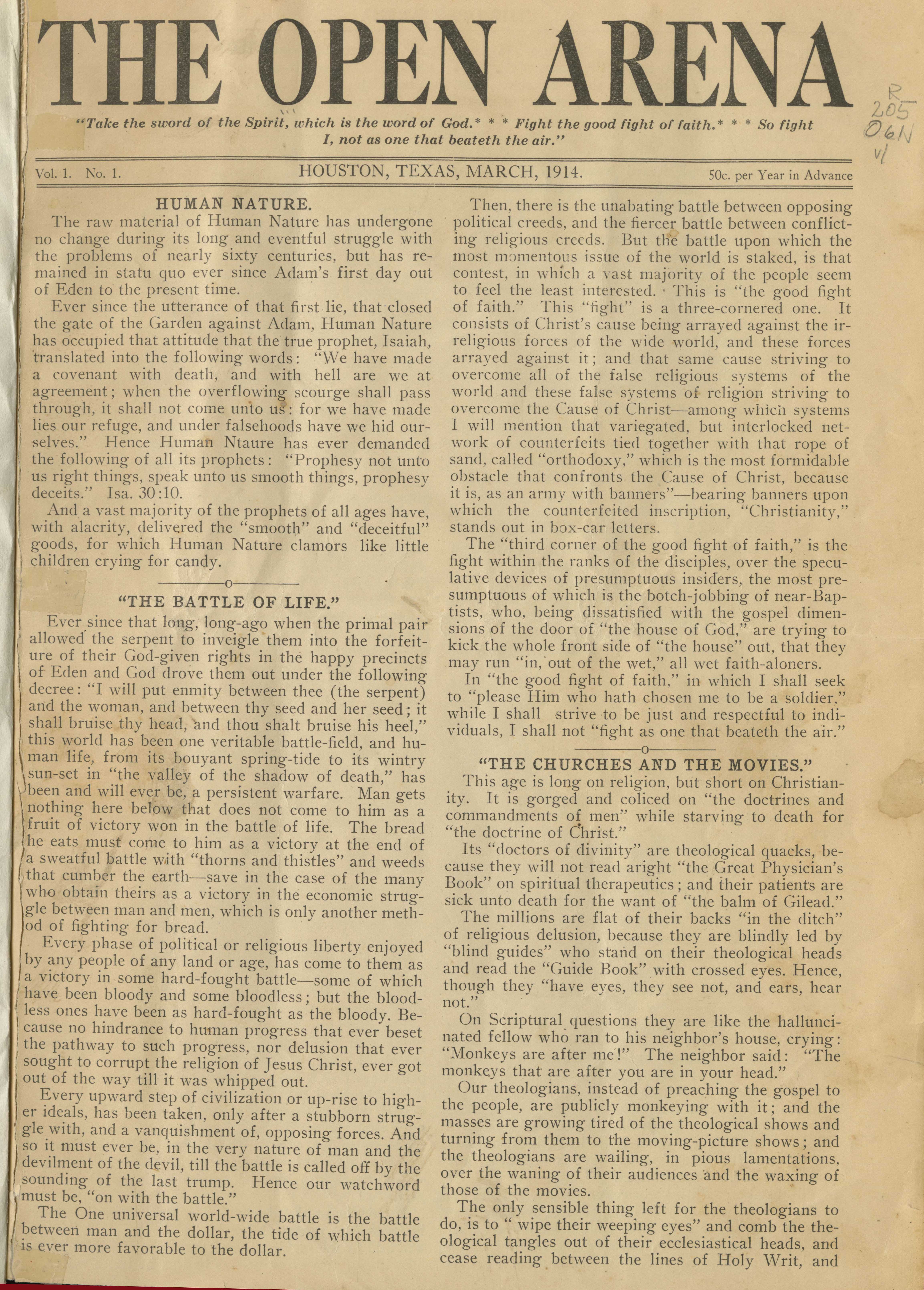