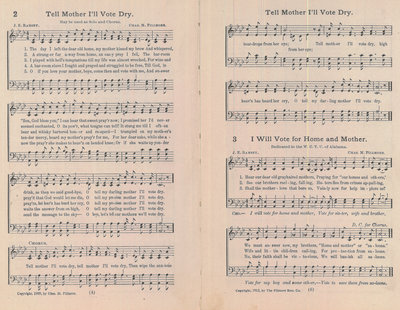 A copy of the song, "Tell Mother I'll Vote Dry," by J. E. Ramsey and Charles M. Fillmore. The Fillmore brothers were passionate supporters of the temperance movement. From the preface: "The authors and publishers of 'Songs of Might' take pride in the fact that they have been in the vanguard of this work. It is not empty boasting to say that we have written and published more temperance and prohibition music than all other writers and publishers in the country combined." In 1898, Charles Fillmore had written another "Tell Mother" song called "Tell Mother I'll Be There" which became a popular evangelistic song.