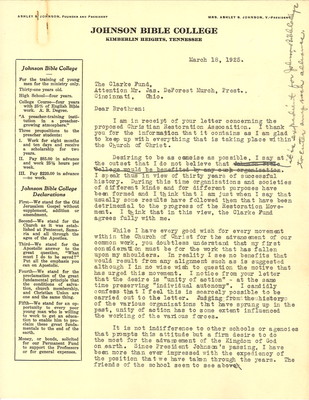 10. The Emergence of Christian Churches/Churches of Christ

This 1925 letter from president of Johnson Bible College (JBC), Emma Johnson (1863-1927), gave several reasons for her choice to deny affiliation with the newly established Christian Restoration Association (CRA). The letter reveals Johnson's firm stance on the independent nature of JBC. It demonstrates the tensions between "cooperatives" and "independents" in the 1920s and the process by which an institution could be invited to affiliate with the conservative CRA. Beyond that, it shows the work of one of the first female presidents of a college in the United States.