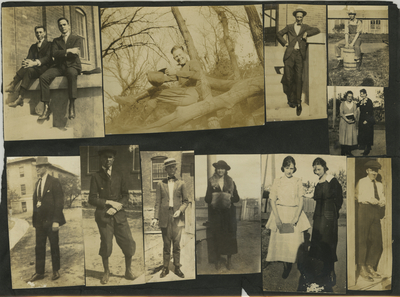 1. Paul Witt and Thornton Arledge sitting on a wall next to the front steps of a building. 2. Byrd Ray Lewis at a picnic near Elm Creek gathering pecans. 3. Dean Speck leaning up against the wall on the steps in front of a building, resting his arm on the wall. 4. Dean Speck sitting on a barrel wearing overalls. 5. Two young ladies, one in a lighter colored dress and the other in a dark dress. 6. Thornton Arledge standing on the ground just off the sidewalk, wearing a hat and not looking at the camera. 7. Aldredge Mason (who later became Asst. Dir. at Pittsburg Glass) wearing nickers while holding his left wrist with his right hand. 8. ?? 9. Lucile Walls Nelson in a different pose from the other side of this collection in photo #11. 10. Two different young ladies standing in the same spot as the young ladies in photo #5, however, the individual taking the photo has cast a shadow on both of them. 11. Ernest Legow standing in the doorway of a building, wearing a hat and tie, with a white shirt.