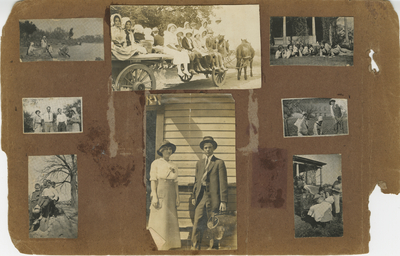 Photos of various scenes with people. There is only one photo on one side and it contains six individuals, three women and three men. From the left: Roy Coons (teaching chemistry in 1920-1921), Delma Mabry, and the rest are not known at this time. The other side contains eight photos. Top left is of five individuals, two men and three women in a boat, paddling along a body of water. Middle left is of four individuals standing next to each other, two women standing on either end of two men. Bottom left is of four boys surrounding a stump with a tree in the background on the side of a hill. Middle top is of a hayride with at least sixteen people visible. Middle bottom is of two individuals, a woman and a man - he is holding a suitcase, wearing a suit and hat while she is wearing a white shirt, black and white checkered skirt, and a hat. Top right is of six women laying on the grass in front of a house. Middle right appears to be three individuals planting a tree. Two women on the left and one man holding a tool of some type. Bottom right is of four women, two sitting in a chair while the other two get ready to cover them with a sheet.