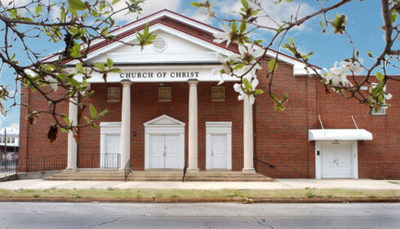 The first evidence of efforts to return to New Testament Christianity occurred in 1834 in Tuscumbia. Dr. William H. Wharton, who had settled in Tuscumbia in 1819, Somehow, became convinced of the need to adhere to the scriptures alone as an all-sufficient rule of faith and practice. Whether he reached this conviction through reading, through hearing others preach it, or through his independent thinking and study of the Bible, we do not know. At any rate, the following letter of Dr. Wharton is self-explanatory. Tuscumbia, Alabama, 1834 “………. twelve of us organized ourselves into a worshipping congregation, to be called “The church of Christ in Tuscumbia, since which time the Lord has graciously added to our numbers, until we have now about 30 members, living in great harmony, peace and love, and meeting every first day of the week to worship him who is the Lord of the Sabbath, to commemorate his death for our sins, and to rejoice in the hope of life through his resurrection. …..” “…We have much opposition to encounter long-cherished opinions, deep-rooted prejudices and jealous fears are all arrayed against us: but though our opposers are numerous, they are without strength; and though they have zeal, it is without knowledge; therefore, we will not despair; for greater is He that is for us, than they that are against us….” During these years Dr. Wharton continued to be the mainstay of the Church in Tuscumbia, and it is certain that a building was erected. In 1842 Dr. Wharton moved his family to Nashville. The church ownership of the building was lost. The church at Tuscumbia seems to have been “dead” from 1847 until 1866. If the white brethren of that vicinity were leaving no record, the black brethren were nonetheless making their mark! In about 1911, A small meeting house was constructed. A major calamity befell the congregation in 1924 when the meeting house burned. In 1925 a new building was constructed. In 1955, the elders decided to build a new auditorium. The Elders agreed on the indebtedness for a new building provided we did not discontinue any of our mission work. The history of the Tuscumbia Church of Christ would not be complete without remembrances of so many of our beloved brothers and sisters who have influenced, during their busy, active, full Christian lives, the spiritual growth of this congregation. Their names and acts of stewardship are far too numerous to mention them all. So many precious Christians, have left their influence for good and righteous living to all of us here in Tuscumbia. The Church through the years has endeavored to be as the Lord planned-His Spiritual Body. We aspire to be a loving, friendly and God-like group of Christians, with our elders, deacons, teachers, ministers and each member looking to the Light of our Lives to show us the Way and forgive us when we stumble.