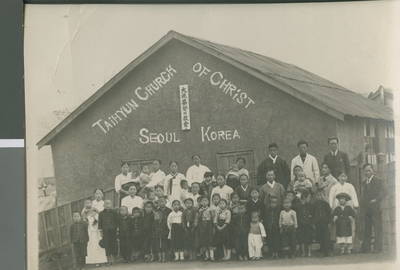 "Moonsuck Kang, P.O. Box 22 Sutamoon, Seoul, Korea. This is the picture of the church building for which I have to have $350.00 as soon as possible and of the people who attended worship service on November 7th 1937. It is on Kongduck Chung in Seoul Korea and is called Taihyun Church of Christ." An exterior view of one of the first Churches of Christ in Seoul, South Korea, the Taihyun Church of Christ. Moonsuck Kang, the person who wrote the caption on the back of the photograph, graduated from Vanderbilt University in the mid-1930s where he was converted to Churches of Christ. He then attended Freed-Hardeman University to study preaching and returned home to South Korea in 1936. During his time as a preacher he helped establish six congregations in South Korea and worked among his people until his death in 1941. Moonsuck Kong is the first person on the far righhand side of the photograph.