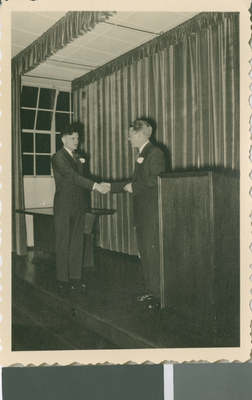 "Dieter Fritschie, Richard Walker, 6-29-51, graduation" Richard Walker shaking Dieter Fritschie's hand upon his graduation from the Frankfurt Bible School. Richard Walker was part of the second wave of missionaries that came to post-war Germany from Churches of Christ. His work began in Heidelberg, Germany, until he moved to plant churches in Berlin, Germany in 1953. Dieter Fritschie served in the German Army from 1943-1945 and was captured by Americans in the Harz mountains and served one year as a prisoner of war. After his release in 1946, he read an advertisement in a German Newspaper about the Frankfurt Bible School. He entered the school in January 1949 and was baptized and preached his first sermon in 1950. He then went on to be an evangelist in his native Germany.