The Boys' Home Outside of Frankfurt Part 2, Frankfurt, Germany, 1948 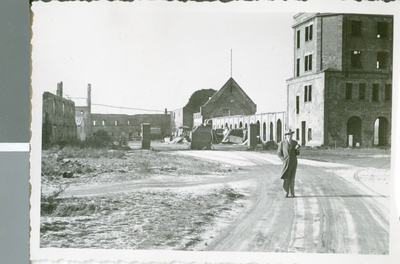 "J. C. standing in the way." The road to the Boys' Home outside of Frankfurt, Germany, run by missionaries from a cappella Churches of Christ, dominates the foreground of the photograph while the bombed out ruins of the Rebstock Airport dominate the background of the photograph. J. C. Moore, the liaison between the Church of Christ and the German and Occupational Governments, stands in the middle of the road. Moore made it possible for the denomination to be legally recognized in Germany and to receive the support of both governments through the years. In terms of the Boys' Home, the United States Army had requisitioned the airport and allowed the missionaries to establish their Boys' Home there because they thought the missionaries could help the large number of homeless boys that lived in Frankfurt at the time. This photograph comes from a photo album put together by Katherine Patton, a missionary from a cappella Churches of Christ, during her work in Germany from 1948-1958.