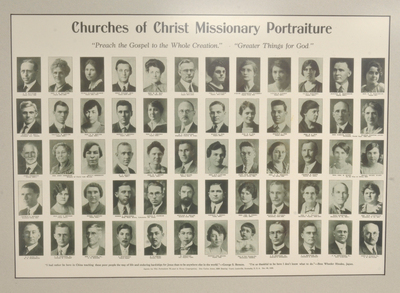 "Churches of Christ Missionary Portraiture 'Preach the Gospel to the Whole Creation.' 'Greater Things for God.' 'I had rather be here in China teaching these poor people the way of life and enduring hardships for Jesus than to be anywhere else in the world.' - George S. Benson. 'I'm so thankful to be here I don't know what to do.' - Bess Wheeler Rhodes, Japan. Agents for This Portraiture Wanted in Every Congregation. Don Carlos Janes, 2229 Deering Court, Louisville, Kentucky, U. S. A. Dec. 30, 1926." This is a portraiture of the majority of missionaries sent out or supported by American Churches of Christ from the late 19th century until 1926. It was conceived of, organized, and printed by Don Carlos Janes, a missions advocate who promoted missions among the American and Canadian congregations of Churches of Christ from 1911 until his death in 1944.