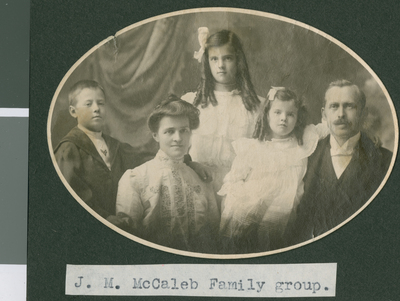 "J. M. McCaleb Family Group." This is one of four photographs on a scrapbook page concerning the McCaleb family, arranged by Clara Bishop. J. M. McCaleb and his wife Dorothy were a part of the first group of missionaries from the Stone-Campbell Movement to work in Tokyo, Japan. They arrived there in 1892. McCaleb primarily focused on evangelism, education, and charity, but also frequently contributed to the various periodicals of a cappella Churches of Christ, especially in regard to foreign missions. In 1907 Dorothy McCaleb along with their three children returned to the United States, but John McCaleb continued working in Japan, off and on, until he was forced out by war in 1941. He remained separated from his family for the majority of that time.