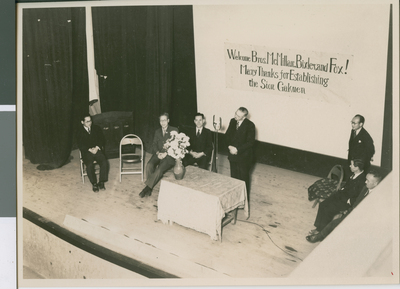 Orville D. Bixler speaking into a microphone in front of a banner titled, "Welcome Bros. McMillan, Bixler, and Fox! Many Thanks for Establishing the Sion Gakuen," with Logan Fox seated on his right. Bixler worked as a missionary from a cappella Churches of Christ in Japan from 1918 until his death in 1968. Logan Fox was the son of Harry Robert Fox, a missionary to Japan from a cappella Churches of Christ, and was born in Japan. In the welcome ceremony, several of the kindergarteners performed traditional Japanese dance and sport for those in attendance. "Sion Gakuen" is Japanese for "Zion Academy." The Zion Academy was originally founded as "Taga Gakuen" or the Taga Academy, a kindergarten that was stated and run by the Taga Church. It changed its name to the "Zion Academy" in 1947 to better reflect and emphasize its spiritual emphasis. This kindergarten was the foundation for "Zion College" which eventually changed its name to "Ibaraki Christian College" because American supporters of the college disliked the association of the name "Zion" to the term "Zionism" that was becoming increasingly associated with conflict in the middle east during the late 1940s.