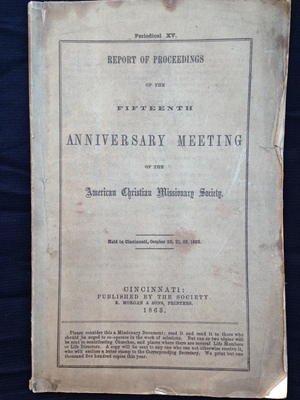 2. Developments in the United States to 1866

Original document, which remains in a private collection, was loaned to ACU for digitization in 2015.

1863 American Christian Missionary Society Proceedings held in Cincinnati, Ohio October 20-22, which contains the "infamous" Loyalty Resolution that was presented and passed. The resolution, presented by Brother R. (Randall) Farout referred to the South as "armed traitors" who were attempting to "overthrow our Government..." Page 24